That evening, Yuan Che’s treatment officially began, and with Feng JiaLing there, Yuan Xi was finally relieved since, in his heart, Feng JiaLing was all-powerful and even more dependable than Yuan Lie.

Yuan Xi was ready for a good night’s rest. Although there was still a lot going on, he had been strung tight since he was newly married, or since he began preparing for marriage. And in the gray hole, he had been busy trying to survive, looking for a way out, or looking for Yuan Che. He could never relax.

Yuan Xi was already thinking that they should go on a make up honeymoon. A sweet, happy honeymoon where they could do whatever they wanted.

“Are you ready yet?” Yuan Xi, who was already dressed for dinner, impatiently pursued the question about the honeymoon.

“Ready in just a minute! Mn, I can’t leave tomorrow, but I’ll be free the day after tomorrow…” Luo XiaoLou hurriedly ended his communication with Tian Li and Yates, got dressed and went to Yuan Xi’s side.

Yuan Xi had a good look at him, pulled Luo XiaoLou’s scarf and hat out and put them on him, then tugged him out.

In the hallway, they met the maid and the butler who were on their way to serve dinner and saw Yuan Xi and Luo XiaoLou dressed up for a night out, including Luo XiaoLou’s 125, with his tail up next to him. Perhaps he had changed into his hooded coat for the occasion.

“Have a good time, Your Highnesses,” the butler bowed and replied with a knowing smile on his face. He thought proudly, Look, these are the men of the Yuan family: handsome, noble, and wise. They are the most powerful and wealthy men in the empire. And to top it off, they are devoted, faithful to their marriage, and they dote on their wives, almost to the point of indulgence- The loyal and devoted Mr. Butler had never known the word ‘fear the wife.’

They were simply the most perfect and suitable people for marriage. Anyone who could marry a man of the Yuan family was happy and lucky. Looking contentedly at the backs of Yuan Xi and Luo XiaoLou plus 125, Mr. Butler smiled and stroked his chin.

If His Royal Highness, Prince Consort was free, he could also help with kids.

Luo XiaoLou felt numb. He felt as if there was a hot line of sight staring at him, but when he looked back, he could only see Mr. Butler standing respectfully with his hands at his sides.

“Come on, don’t look back, we’re in a hurry. It’s enough of a burden to take you with me. Can’t you just save me the trouble?” Yuan Xi muttered.

Luo XiaoLou withdrew his gaze and looked at Yuan Xi. He realized that Yuan Xi’s outfit today, Mn, was very elegant. He’d obviously carefully groomed and looked especially handsome and charming, when he was usually already attractive enough for him.

As Luo XiaoLou walked beside him, he felt that by comparison, he was like a gray rat, and felt sour in his heart.

Twenty minutes later, the noble and wise prince of the butler’s heart, was now wearing a mask, hat and glasses, and was gesturing to Luo XiaoLou with a fierce look in his eyes.

Luo XiaoLou coughed and told the waiter beside him, “These three classics, plus the new variety you have in the store. All of them, no mint, please.

“Wait, another fruit one,” Yuan Xi said. Luo XiaoLou didn’t eat a lot of cake, but he could eat a little more fruit cake.

The waiter gazed at the two tightly wrapped men at the couples’ table and smiled a little. He had seen many secret dates. If the young man came alone one day, he could order a cake, leave his address and phone number, and have it delivered to his door or something…

After confirming the order and smiling at Luo XiaoLou again, the waiter turned and left.

Yuan Xi’s face grew darker as he stared at Luo XiaoLou’s face, which had been revealed by the scarf he had ordered. Because of Luo XiaoLou’s letting the scarf slip down, there were a lot of people in the bakery sneaking glances at him right now, and it was just- it was so ungentlemanly that he was going to tell him about it tonight – no, later!

In a short time, the waiter came over with a large plate of cakes. Miki’s cakes were beautiful,  tasty, and unique. And their prices were much higher than similar stores. Luo XiaoLou’s selections of cakes were the most delicious in the store, and certainly not cheap.

Many girls in the store looked on with envy, admiring Luo XiaoLou’s generous boyfriend and the fact that someone could eat cakes as they pleased without fear of gaining weight.

Luo XiaoLou looked at the table full of cakes with satisfaction, took out a card, and asked the waiter to transfer the money. The waiter looked at Yuan Xi incredulously and slightly contemptuously. Oh my God, it’s unbelievable that he lets his lover pay for it himself!

125 climbed onto the small couch in the middle, despite Yuan Xi’s dark face. In front of him was a set of shiny dishes and a cute toy that came with the cake. The waiter was so attentive! 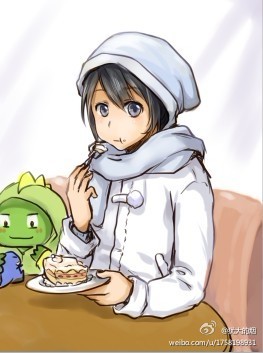 Luo XiaoLou pinched Yuan Xi under the table, but Yuan Xi grabbed his hand, and he was unable to pull away. Yuan Xi stared at the wedding ring on Luo XiaoLou’s hand, and his anger was lessened. When he becomes a white-haired animal, no one will want him but him.

Luo XiaoLou shifted, blocking the view of the outside world, before cutting off a small piece of what looked to be an incredibly beautiful cake and pushing it over to Yuan Xi.

Yuan Xi, who was angrily berating Luo XiaoLou in his heart, eased his dark face a bit and picked up his fork.

“How was it?” Luo XiaoLou leaned over and asked, feeling amused every time Yuan Xi took a bite of the cake, eating in all seriousness, but not daring to laugh.

Yuan Xi was putting a bite of cake into his mouth but, upon hearing this, paused and looked at Luo XiaoLou, murmuring, “It’s not bad-“

Yuan Xi watched dumbly as Luo XiaoLou pulled his hand out of his grasp, and took a bite of the piece of cake he was about to put in his mouth.

Yuan Xi looked down at the fork in his hand, and after two seconds, he put it in his mouth and ate the remaining bite without changing his face. Then he leaned in, grasped Luo XiaoLou’s neck with one hand to hold him in place, and opened Luo XiaoLou’s lips with the tip of his tongue.

After a while, Yuan Xi withdrew and agreed, “It’s good.”

Luo XiaoLou gazed at Yuan Xi in surprise, his face burning a little. As a conservative married man, Luo XiaoLou quickly glanced around and saw that there were indeed people smiling and looking over at them, obviously having noticed their little gestures, and even 125’s big eyes were glinting.

“Time and place,” sang 125. His complaining tone would have been more convincing if it weren’t for the joyfulness in his voice.

Luo XiaoLou greeted the waiter and wrapped the remaining cake. 125 took the opportunity to collect them.

The waiter enthusiastically escorted the two of them out the door, explaining the store’s special offers incessantly. It wasn’t until Yuan Xi took Luo XiaoLou’s hand and waved it in front of him, that the simple, yet luxurious wedding rings shone together.

The entire staff at Miki Bakery was relieved that the owner no longer had to pretend to be a waiter to fawn over them. They had felt so pressured.

When the hover car stopped again, Yuan Xi was in a much better mood as they walked into the Grand Club with Luo XiaoLou, and handed a card to the waiter.

After swiping it, the waiter was even more respectful as he led Luo XiaoLou and Yuan Xi into a special elevator and then escorted them to a private room.

“Huh? A hot spring?” Luo XiaoLou realized that there was a private hot spring pool in the room.

“Give it a separate room, or take it to the children’s area,” Yuan Xi ordered as he tossed 125 to the waiter with disgust.

The waiter was dumbfounded, but didn’t dare say anything as he caught the strange, fat green robot, turned around and left.

Yuan Xi tore off both their hats and scarfs, then stripped down to nothing and sank into the hot spring pool. Then he squinted at Luo XiaoLou and said, “Come here.”

“No – no! I don’t want to wear something like that ……” Luo XiaoLou stammered. He was terrified and admitted that he had misjudged Yuan Xi’s lower limit.

“You – you!” Luo XiaoLou’s face burned even redder. My God! When Yuan Xi went out to order such things, I’m the one who lost face.

Luo XiaoLou was glaring hard at the white furry tail in front of him, and the fur ears on top. He should never have exchanged his sword repair service for those fur clothes…

“No…” Luo XiaoLou blushed, and something hard pressed against his buttocks behind him.

The thing rubbed against his buttocks a few times before Yuan Xi turned Luo XiaoLou over, pushed him against the edge of the pool, and forcibly thrust his fingers into Luo XiaoLou. His fingers drove in, as his other hand was in front of him, rubbing Luo XiaoLou’s desire.

Yuan Xi lifted his head and kissed Luo XiaoLou on the lips again, as drops of water on his face fell down onto Luo XiaoLou’s body.

“……Mn…” Luo XiaoLou grunted in a daze, letting Yuan Xi do whatever he wanted.

Yuan Xi lifted Luo XiaoLou to the edge of the pool, opened his legs, which had been massaged and relaxed. After sucking on his fingers, Yuan Xi pulled them out, and pressed Luo XiaoLou’s torso against the ground. He grabbed the tail and pressed the rod at the top of it slowly into that cave. Luo XiaoLou tried to resist again.

He was now sitting on the edge of the pool with a big white tail behind him and ears on his head, which transformed him into an exotic beast.

With that, Yuan Xi quickly got up, picked up Luo XiaoLou, and carried him to the big bed inside.

We are a group that translates Japanese Yaoi manga and Chinese BL novels. Remember to comment on our chapters or leave a review and rating on Novel Updates, it encourages us!

This site uses Akismet to reduce spam. Learn how your comment data is processed.

9 Tell us your thoughts on the chapter.
Inline Feedbacks
View all comments

I love where this is going… 😏👌

They are sure should have their honey moon time. I am very happy for them.
Thank you for your hard work.

Poor Miki’s cake owner, he had to pretend to be a waiter 😂🤣😂🤣

Thank you for the chapter!!!

YX doesn’t like exotic beasts… yeah right; you just lost that one on points, LX 😏
He might want to consider whether his loving wife feels degraded at all though, as LXL obviously wasn’t comfortable with it really, but tends to go along with what YX wants 😕
Thank you for translating and editing.

Yuan Xi pervert! Ecchi!
You have no shame! It’s you who custom made ears and tail for LXL

Thank you so much❤